­
7 facts about the Lithuanian language

The archaic structure of the Lithuanian language

The ancient Balts were settled and they were not inclined to mix with other tribes, so their languages maintained their ancient form. There are about 7,000 languages still spoken in the world. They can be grouped into language families according to their similarity and kinship (common origin): Indo-European, Sino-Tibetan, Niger-Congo, Afro-Asiatic, Austronesian and others. The Lithuanian as a Baltic language belongs to the Indo-European, one of the most widely-spoken language families in the world. The ancestors of today’s speakers of Indo-European languages spoke a single language, which linguists call Proto-Indo-European (PIE). The scholarly consensus is that Lithuanian is the language that has retained most of the features of the Protolanguage, i.e. it is characterised by a very ancient linguistic structure: declensions (of nouns, adjectives and pronouns), short and long vowels, diphthongs, etc.

Probably no one would be able to unequivocally assert which is the very oldest language in the world; but it’s a fact that the Lithuanian language is one of the oldest and most archaic living languages in the world, and it has preserved more features of PIE than any other Indo-European language.

It is not clear when the Lithuanian first began to be written. The official written languages of the Grand Duchy of Lithuania were Latin, Chancery Slavonic and Polish.  In the long run, as the use of Polish increased due to the gradual Polonisation of the gentry during the 18th century, the Polish language encroached in all fields, even becoming a threat to the role of spoken Lithuanian; but fortunately, the common people kept on speaking Lithuanian.

The de facto beginning of the contemporary Lithuanian written language is related to the appearance of the first known Lithuanian printed book in 1547 – the Catechism by Martynas Mažvydas, a pastor of the Evangelical Lutheran Church. The first known printed version of the Lithuanian alphabet is included in the book too. It is true to say that isolated texts written in Lithuanian before this date are known to exist. 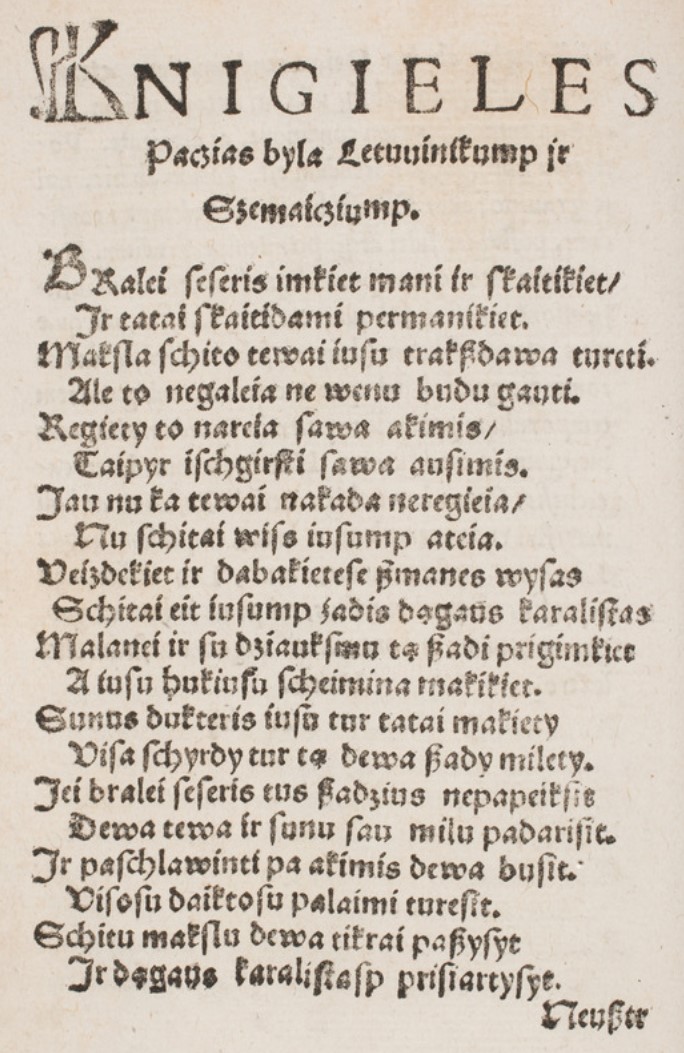 If we rewrite this in normal Latin letters, we get:

In modern Lithuanian it would appear thus:

The contemporary Lithuanian alphabet (abėcėlė) consist of 32 letters. Diacritical marks – ą, č, ę, ė, į, š, ų, ū, ž – appeared in Lithuanian relatively recently, only a few centuries ago. The alphabet published in the Mažvydas Catechism contained no diacritic letters. We see 23 capital letters in Latin script and 25 lower case letters in Gothic script. For example, Mažvydas used the German letter combination sch to represent the today’s Lithuanian š (in English it is sh). Although the letter w is used in the Catechism, Mažvydas did not include it in the alphabetic table. 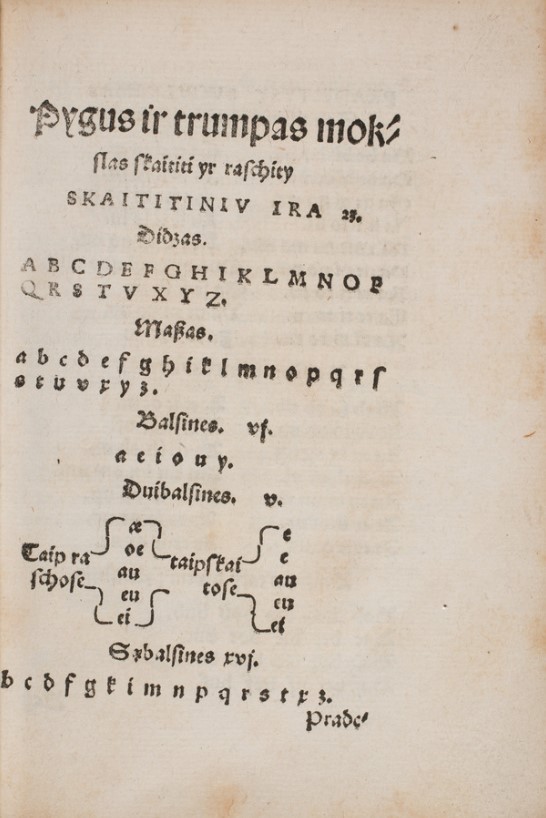 Lithuanian language alphabet in the Catechism of Martynas Mažvydas

Since the Latin alphabet lacked enough letters to represent all the sounds of the Lithuanian language, solutions were sought by looking at the languages of their neighbours. In the 19th century Lithuanians borrowed letters with the caron č, š and ž from Czech. The Czechs had started using them in their language in the 15th century. They were introduced by Jan Hus, an activist of the Czech national movement, as he worked on creating a national system of writing for the Czech language.

Unsuccessful attempt to force the Russian alphabet on Lithuanians

The Lithuanian language suffered a severe period of hardship from the end of the 18th century until the early 20th century, when it was subjugated by the Russian Empire, with the Tsars implementing an assimilationist policy. The Tsar’s régime banned the publication of books in Lithuanian using the Latin alphabet. They could only be published if they were printed in “graždanka” (Civil Script) – a modified version of Cyrillic. Some books and calendars were published using this Russian-based alphabet; however, the Lithuanian national movement was strengthening at the time and these publications were not popular, they were boycotted. 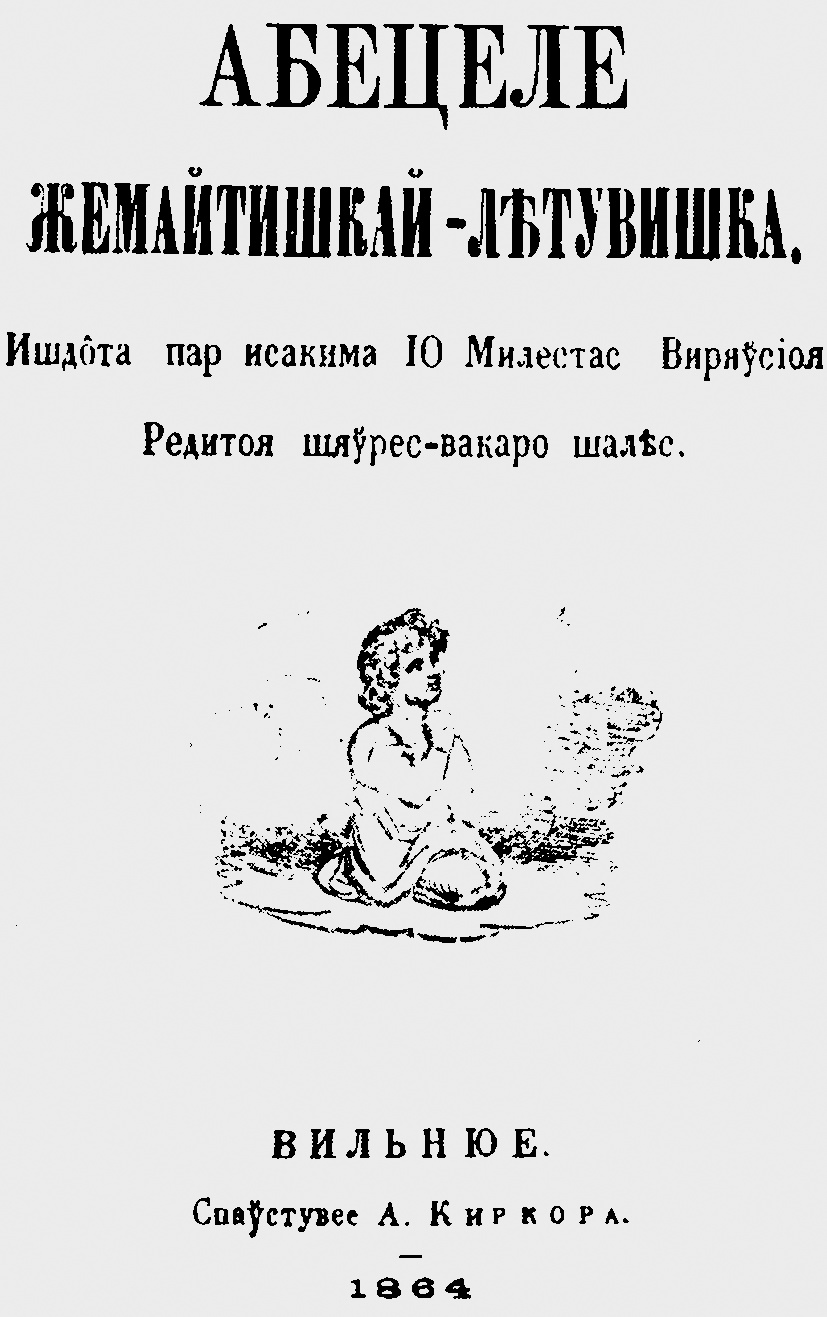 Kauniškiai dialect is the basis of Standard Lithuanian

Standard Lithuanian is based on the dialect called Kauniškiai. Just to be clear, this dialect is not the one spoken in Kaunas, Lithuania’s second largest city. We are talking about the dialect to the southwest of Kaunas (Marijampolė, Prienai, Kalvarija, etc.), also known as the Suvalkiečių dialect. There are two basic dialects in Lithuania: The High Lithuanian dialect (aukštaičių tarmė) and the Low Lithuanian (Samogitian) dialect (žemaičių tarmė). Each of them is divided into various subdialects. In the 19th century, the people of the Suvalkija region played a major role in the formation of Standard Lithuanian, as that is where the leaders of the national renaissance movement such as Jonas Basanavičius and Vincas Kudirka, among others, were active. They organised the printing of Lithuanian books and periodicals, which required standardisation of the language so that everyone could read it. The major contributor to the standardisation of the Lithuanian language was the linguist Jonas Jablonskis, also a native of Suvalkija. The newly-emerging Standard Lithuanian was used for publication of Lithuanian books and periodicals, e.g. the newspapers Aušra (‘Dawn’) and Varpas (‘Bell’). Because of the Russian Tsar’s ban on the use of the Lithuanian alphabet in publishing, the material was printed in so called Lithuania Minor, which belonged to Prussia (German Empire), and it was distributed in Lithuania and abroad.

Although the written Lithuanian language is relatively ‘young’ (barely a century has gone by since the final standardisation of the alphabet and writing system), the spoken Lithuanian language is old and archaic, having been able to survive for thousands of years and to get through various attempts at robbing Lithuanian speakers of their identity. Unlike in the ancient days, modern Lithuanians are no longer stay-at-homes; in fact, they are inclined to migrate. About a million residents have left Lithuania since independence was restored in 1990. Some are returning, and others may return, but the majority will stay abroad, and Lithuanian will not be the native language of their children or grandchildren. Today, the same as several hundred, one hundred or fifty years ago, for Lithuanians it is important to maintain the oldest Indo-European language, whether they live in Lithuania or abroad.

This article is also published on the news portals We love Lithuania and The Lithuania Tribune.